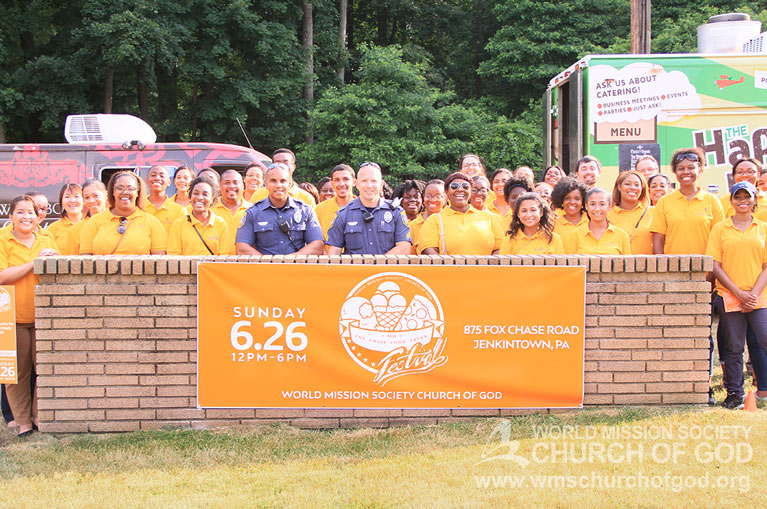 “Summer’s here. And so are the food trucks!”

For the two weeks leading up to Sunday, June 26th, radio stations in the Greater Philadelphia area aired the Fox Chase Food Truck Festival commercial to more than 600,000 people. Social media continued to spread the word. Even residents of New York and New Jersey heard the exciting news: The World Mission Society Church of God in Philadelphia was hosting its very first food truck festival! 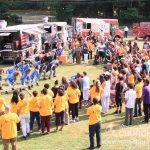 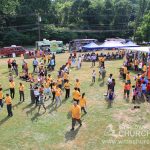 Food trucks parked around the Church of God’s perimeter, offering a mix of everything from savory to sweet. 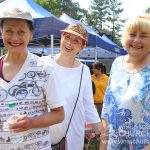 Neighbors from near and far joined the Fox Chase Food Truck Festival and supported the Montgomery County Summer Meals Program.

Members of the Church of God in Philadelphia wanted to figure out a fun and interactive way to engage the community. Thus, the Fox Chase Food Truck Festival was born. The event centered around raising funds for the Montgomery County Summer Meals Program, a program that supplies children living below the poverty line with meals during the summer months when school is not in session. And the food trucks were more than willing to leave their Center City locations to support the great cause.

More than 820 guests came from near (down the street) and far (out-of-state) to taste the scrumptious food truck food and support the Montgomery County Summer meals program. While going from truck to truck, members of the World Mission Society Church of God introduced various live performances. Members volunteered to sing, deliver poetry and dance. Local Philly dance groups—Restyles Crew and In Da Clutch Entertainment—entertained the crowd with upbeat music and breakdance moves. Meanwhile, children enjoyed the bounce house and face painting stations. 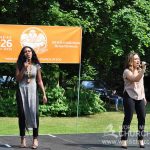 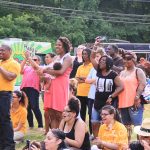 The audience loved the live performances, which added flair to an already sweet event. 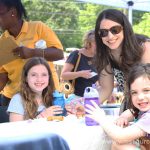 Families enjoyed quality time together by making an outing out of the Fox Chase Food Truck Festival. 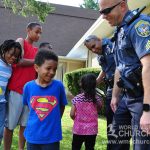 Children have fun with police officers during the Fox Chase Food Truck Festival. 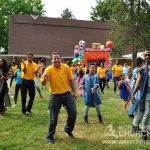 Volunteers got the party started by dancing with guests, even off the stage!

Neighbors in the Jenkintown area expressed delightful surprise at the Church of God’s food truck event. Many guests took the time to learn more about the Church and its beliefs at the Church of God tent. Videos and Bible seminars allowed guests to understand the reason for the Church’s desire to serve its community with the heart of Heavenly Mother.

At the conclusion of the event, Kristina Robinson, Director of the Montgomery County Summer Food Service Program, thanked the Church of God for making a difference in the program and, ultimately, the children the program supports. With the $8,000 raised through the Fox Chase Food Truck Festival, the program plans to upgrade their delivery equipment with refrigerated trucks to make the process more efficient and reach more children.