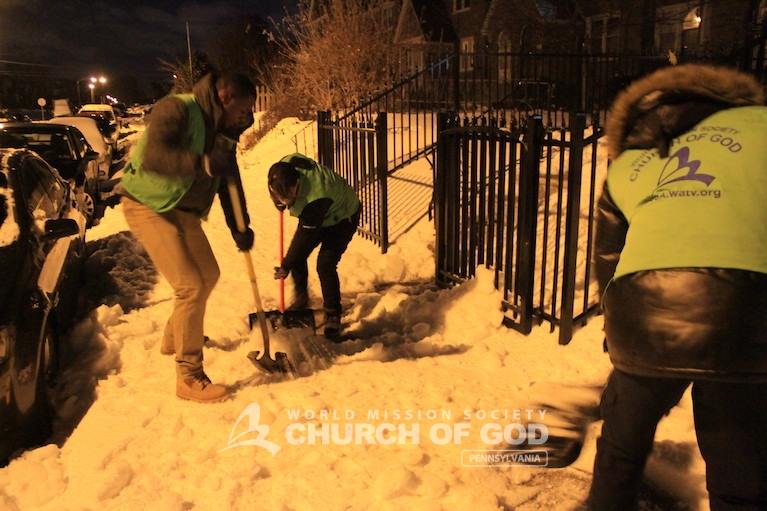 On Tuesday, March 14, Winter Storm Stella dumped record-breaking amounts of snow throughout the Northeast. While no records were broken in Philadelphia, the city was still under a state of snow emergency. To battle the blizzard’s effects, members from the Church of God in Philadelphia were called upon. The volunteers ventured out into the storm’s aftermath to aid families and individuals with shoveling and ice removal.

As Winter Storm Stella made its way across Philadelphia its impact was felt. It was bitter cold and streets and walkways were buried under layers of snow. Moreover, such difficult conditions made it dangerous for elderly and disabled individuals. The reason is that accessibility to their homes in case of an emergency becomes problematic during heavy winter storms.

As the snowfall continued, the office of State Representative Jared Solomon received several phone calls and emails. Citizens were requesting immediate assistance to combat the effects of the storm. Representative Solomon quickly reached out to the Church of God, who recently held an environmental cleanup just weeks prior to the storm. As community emergency response team members, the Church of God volunteers were ready to help the community.

A little over 60 volunteers from the Church of God hit the snow-covered streets of Northeast Philadelphia. Armed with shovels, rock salt, and their signature green vests, the members answered the call at nine o’clock at night. Furthermore, over 150 homes requested snow removal assistance. Nevertheless, members went house to house, without neglecting a single home.

Throughout the night the volunteers chipped away at the ice-covered porches and plowed through the snowy driveways. Along the way, some volunteers stopped to help a few drivers free their cars that were stuck in the snow. Residents offered their sincere gratitude as the volunteers continued shoveling until about one o’clock in the morning

“I can’t believe this; you guys are really special,” said one local resident who benefited from the Church of God’s efforts. Representative Solomon also offered his appreciation towards the Church of God members, calling them “the best thing to ever happen to Northeast Philadelphia.”

The efforts of the members caught the attention of local news station NBC 10 who broadcasted the scene. They reported the emergency response work during their 11 o’clock airing.

Check out the Church of God in the news: